Love comes in all shapes and sizes. The love Borrowell member, Michelle, has for her cat, Epic, is unconditional! Read Michelle's inspiring "Money Worries to Wins" story.

Michelle's life used to look much different than it does now. Just two years ago, she had maxed out two different credit cards, was in a mountain of student debt, and on top of all that, her cat, Epic, was sick.

Michelle didn’t know what to do about her fur baby. So when she was offered a 3rd-party loan from the veterinarian clinic – with an interest rate of 27% –  at a very vulnerable moment, she felt she had no other option but to take it.

“When I started to really delve into my personal finances and looking into bettering them, I realized, at that moment, I was in a very bleak situation,” the Ottawa-native said.

Fast forward to the present. Thanks to Michelle’s self-starter attitude, she began using Borrowell's free credit monitoring service and improved her credit score dramatically. She paid off both credit cards, and took a debt consolidation loan with Borrowell to get rid of her high-interest loan - that she's already paid off! Plus, her Epic is a happy and health cat, which makes Michelle happy, too.

Michelle put herself through school, working two jobs: one as an AutoCAD technician and another as a floral clerk at a grocery store. Her drive to always be improving is what led her to Borrowell.

“Being able to have all the information that came along with the credit monitoring was also really helpful, especially at the beginning to see what card balances I should pay off first.” Michelle said. “Using Borrowell’s credit monitoring service was a great start for me.”

While some of the banks also offer credit monitoring, Michelle felt the banks never served her well. She used one of Canada’s “Big 6” banks for her early adult life but describes them as being impossible to deal with.

“I lost a lot of sleep and pulled out way too much hair, stressing about them and their services. They were both expensive and ineffective for my needs,” explained Michelle.

After a few months of using Borrowell's, she paid off both of her credit cards and was able to get her credit utilization under control. Credit utilization is how much credit you use out of your total available credit and she learned that it’s best to use only 30% of her total credit limit to improve her credit score.

How Michelle improved her credit score

Michelle instantly started to improve her credit by taking Borrowell's 7-week email course. She had previously been paying for credit monitoring through Equifax and Transunion, and once she looked at her budget, she realized she could be saving $23 a month by switching to Borrowell.

“I get really excited when my new credit score is available,” she said. “It’s gone up every single time since I first began monitoring it, with the exception of the month I received my Borrowell loan – but I knew that was coming thanks to the information provided to me.”

With her credit card debt taken care of, Michelle needed to focus on the high-interest loan she took from the vet.

“I first worked on my credit score. Then I began hunting for the best loan I could get to get rid of the terrible one that I had from the vet – which was by far the scariest loan,” Michelle said.

It took some time, but eventually, one day Michelle logged into her Borrowell account and navigated to her dashboard. She saw a new product recommendation – she now qualified for a Borrowell personal loan! The loan had a competitive interest rate and had no extra fees for prepayments.

“The application took me two minutes, from when I was going to apply from when I had everything already gathered, and it was just so easy, I didn’t even have to leave my desk,” Michelle said.

When Michelle found out she qualified and saw her approved interest rate, she was excited because it was even better than any others she was told she would be approved for. Finally, she was able to call her existing loan provider. But she found out had only paid off $72 of principal in nine months of having a loan.

“That really hurt,” she said.

By choosing to consolidate her debt with Borrowell, Michelle was able to get out of debt 4 years earlier and has now paid off her loan in full!

“I feel like I’ve made it over the mountain and that thought in itself leaves me less stressed,” she said.

Michelle is also committed to monitoring her credit so she can start saving for a house.

And for all those wondering, Epic is doing fantastic! 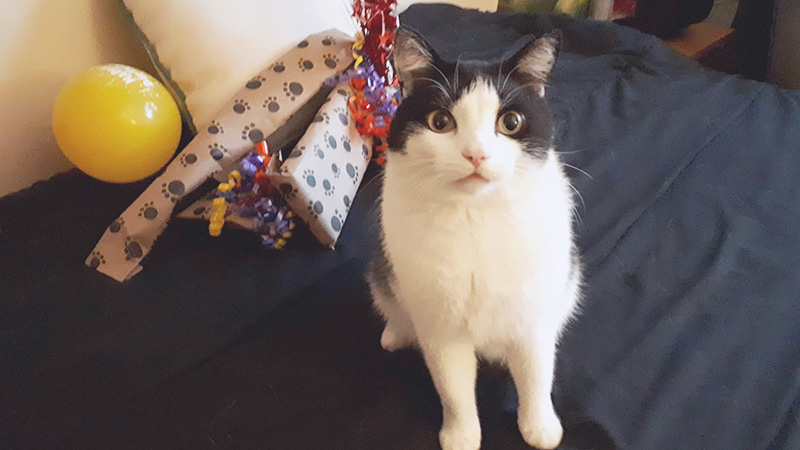 You have what it takes to turn your money worries into money wins! Check your free credit score with Borrowell and see what loans you could qualify for. It's free, takes 3 minutes or less, and won't impact your score.

Get Your Free Credit Score!

About BorrowellCareersFAQ/Help CenterThe Well BlogContact UsPrivacy PolicyTerms of Use

Borrowell® is a registered trademark of Borrowell Inc. All Rights Reserved. The Equifax credit score is based on Equifax’s proprietary model and may not be the same score used by third parties to determine your credit profile. The score provided to you for educational use is the Equifax Risk Score.